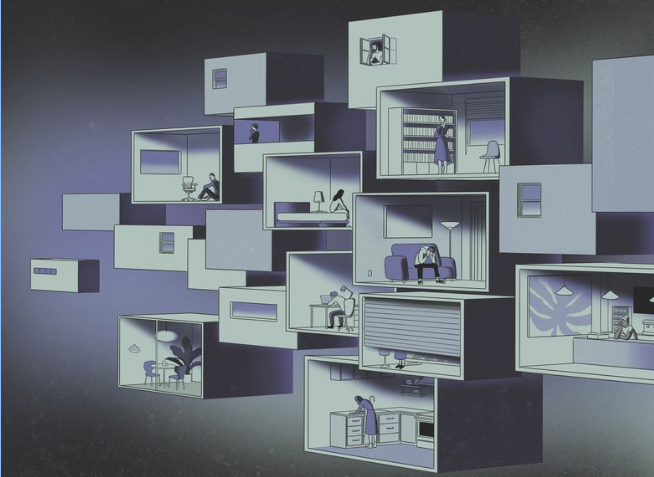 The swelling ranks of unemployed Americans and images of shuttered shops and empty streets have begun to tell the grim tale of the economic destruction caused by the Covid-19 pandemic. They also presage a brewing real estate crisis. About $81 billion in commercial rent comes due in a typical month in the U.S. The delay of a sizable portion of that will put an enormous strain on the complex systems for financing real estate and highlight how quickly the pain caused by social distancing has spread.

Just 69% of renters paid their rent by April 5, according to data from 13 million units published by the National Multifamily Housing Council, compared with 81% who paid by March 5, providing an early look at how bad things could get if job cuts continue and households blow through savings. In one scenario, renters would need $96 billion in payment assistance over the next six months, according to an analysis from the Urban Institute. It won’t be much better for homeowners. Roughly 15 million households—about 30% of mortgage borrowers—could miss payments if the economy stays shuttered through the summer, according to Mark Zandi, chief economist at Moody’s Analytics.

So far the local, state, and federal governments have responded by imposing temporary bans on foreclosures and evictions, dulling the short-term impact of the economic shutdown in the hope that social-distancing efforts ease later this spring and consumers and businesses get back on track. Those measures won’t be enough, though, if the economy doesn’t rebound quickly. “The initial thinking behind it seems like it was that this is going to last a month or two, and things will go back to normal,” says Tomasz Piskorski, a professor at Columbia Business School, who favors forgiving some interest payments for affected mortgage borrowers. “It buys us some time. But it’s going to take months or years to get back to a new normal.”

The prospect of missed payments is causing problems across the landscape, as economic pain spreads from tenants and property owners to lenders and beyond. Real estate investment trusts that invest in mortgages, many of which committed the cardinal sin of using short-term debt to finance long-term assets, have been forced to sell mortgage securities at deep discounts to meet margin calls from their lenders. That dynamic was a hallmark of the global financial crisis, but this time around it’s harder to argue that distressed households or corporations were greedy or reckless, or that they should have been better prepared for an unprecedented economic shock.

Tom Barrack, chairman of real estate investment trust Colony Capital Inc., argues that real estate finance companies and other nonbank lenders are the pipes that provide liquidity to businesses and individuals, so backstopping mortgage investors is critical to helping small firms and their workers. But he’s not optimistic about government intervention. In an election year, it doesn’t look good to bail out industries perceived to be overleveraged, he says.

Similar problems are festering throughout real estate. The Coronavirus Aid, Relief, and Economic Security Act, passed in March, provides forbearance on government-backed mortgages. Those loans are packaged together and sold as securities, and when homeowners miss payments, mortgage servicers are required to advance principal and interest. That’s problematic for servicers, who’d need up to $100 billion, according to preliminary estimates from the Mortgage Bankers Association.

They’re not the only ones who will need help. At least 2,600 commercial real estate borrowers have already touched base with mortgage servicers about potential debt relief on more than $49 billion in loans, according to Fitch Ratings. More than 75% of those inquiries, made during the last two weeks of March, were for hotels and retail real estate, Fitch said.

What happens next for renters will depend on where people live and how their buildings are financed. Some states have passed temporary bans on evictions, and Fannie Mae and Freddie Mac have promised forbearance to apartment owners suffering hardship because of Covid-19 on the condition that the landlords pause evictions.

Only a quarter of renters live in units financed with government-backed loans, says Mary Cunningham, a vice president at the Urban Institute. Most property owners will have to make arrangements with their lenders as collections fall. Small landlords in particular lack access to the cheap credit needed to weather the storm, and even people who rent from larger companies are unlikely to get the same level of forbearance as homeowners do. Sean Dobson, chief executive officer of Amherst Holdings, which operates about 20,000 single-family rental homes, says his company will offer forbearance “as long as we can. But we don’t have the Federal Reserve to lend to us.”

After a decade in which tight housing inventories have allowed landlords to hike rents, there’s a sense that property owners have had their power diminished. A chorus of voices, from local housing activists to Representative Rashida Tlaib, a Democrat from Michigan, have called on Congress to cancel rent. Another set worries that eviction moratoriums will give renters permission to skip payments that landlords will never get back. “The politicians are commanding that you can’t evict people, and obviously that leads to a lot of behavior changes,” said Jeffrey Gundlach, chief investment officer of DoubleLine Capital, in a recent webcast.

It’s not just apartment dwellers who can’t pay rent. Companies including Subway Restaurants and Mattress Firm Holding Corp. have informed landlords that they may not be able to make rent payments in full. For now, there’s not much commercial landlords can do: A global pandemic is a tough time to find a new tenant.

Rents must be paid eventually, and landlords will have claims even in bankruptcy. In cases where businesses shut down because of government order, tenants will pursue claims of force majeure, arguing that their contractual agreement has been superseded by social-distancing decrees. Landlords may make the same case to lenders. The blameless nature of the crisis could make some problems easier to solve, lowering resistance to government bailouts. A bigger challenge may be mustering a strong response during a crisis in which officials worldwide have repeatedly been slow to take decisive action.

“It’s almost like we’re watching this unfold in slow motion,” says Scott Rechler, CEO of RXR Realty, which owns apartments, offices, and other commercial real estate. “We know the bad part is coming, but we don’t know how long it will last or how resilient we’ll be.” —With Shahien Nasiripour